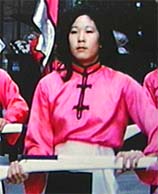 “I’m taking my bows, my curtain calls…” Whenever I hear these words from the popular Queen classic, I always think back to the most exciting years while growing up. As a marching member of the Mandarins in the late 1970s and early 80s, I was fortunate to be a participant in a very successful winterguard program that ultimately brought us the Northern California “A” Championship and a Top Ten placement at WGI in 1980. Although these events took place long ago, I’m sure that for those of you who were part of the organization during these years, many memories remain fresh in our minds.

With our 1978 Star Wars theme and Mark Dong “Darth Vadar,” the Mandarins color guard made a spectacular return to winterguard competition by competing in “A” class. Our style was bold and traditional and we got a big thrill wowing the crowds with our flag exchange and headchopper. This was also the first season that “We are the Champions” was used as our closing song. How many hours did we spend practicing the “lean back” before passing review? This song became our signature throughout the next four seasons.

In the winter of 1979, Greg Morgan had a vision. Lose the shakos and knee-high rubber boots, recruit Irene Bouris, prima ballerina, and teach 21 girls how to ballet dance with flags and rifles. We learned how to feather-kick in Sam Brannan’s cafeteria, chane turn at Confucius Hall, and point, point, point our toes. There were other changes too, some not as obvious as our new uniforms or softer style…

The B-class color guards began to look up to us and suddenly we felt the responsibility of representing the Mandarins and the Sacramento Chinese Community in a positive manner. Do some of you remember seeing the Sailorettes practicing while proudly wearing Mandarins T-Shirts? How about hearing the other color guards and fans alike enthuiastically stomp-stomp-clapping as we took the floor in competition? We never wanted to let our fans down that year…we earned a very respectable 2nd place at Circuit Championship behind Blue Devils “A.”

Some believe 1980 was our year to peak. With two years of competitive experience and our confidence levels high, we worked as hard as ever polishing our ballet styles. We added horizontal aerials, exchanges, and quads, and perfected our splits and “headchopper.” Prior to each show, we assembled into our relaxation circle, focused on our performance, then marched our hearts out! It all came together as we proudly earned the championship and the respect of the drum corps community. We couldn’t have done it without the support of the instructors, Booster Club, and fellow corps members. I still remember the faithful Greg Morgan carrying around his boombox and beat-up rifle; Joyce Yee, Color Guard Director, chaperoning weeknight practices while wrapping pink ribbon roses. Kurt, Ron, and Les, our drumline, carpooling to every show. Then there was Ken, Marty, and Danny yelling “Bravo, little sisters” from the stands, the Ernie Fong van, and all of you who came to support us week after week, year after year.

Sometimes I wonder how I was dedicated to the Mandarins for seven years of my life. Then I think of you, my fellow alumni. Those friendships we established through corps are the ones that remain close to my heart today. We worked hard together, performed together, relaxed together, and grew up together. We relied on each other for support and encouragement, celebrated our accomplishments, and comforted one another in our defeats. I am grateful for those years we shared. The next time you hear “We are the Champions,” think back to those years. I hope your memories are as cherished as mine.