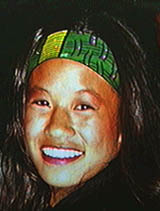 In the beginning of the 1995 season, the Mandarins Winterguard had high hopes of marching a fifteen-member colorguard. As usual, we ended up with a fairly small guard. Eight, to be exact. However, the amount of rehearsal time, camps, bonding moments, ice cream, flag flips, tears, and frustrations were enough for twenty girls. Nothing sums up a season more than the week we were privileged enough to spend in Dayton, Ohio. We were all pretty thankful to have a show where we could emote, display our weapon skills, and use the famous bamboos once again. Once we stepped off the airplane and into the cold Dayton air, that “Oh, my God!! We’re in Dayton!” feeling overcame us all.

Practicing at the YMCA was somewhat of a ritual. After a few rehearsals, lunch at Friendly’s Diner, sitting in the hot tub, mental runthroughs, and pep talks, the time to perform our prelims performance arrived. The rookie of the colorguard was nervous enough for all of us.

The Winterguard International (WGI) preliminary competition was held at the Dayton Arena. The instructors and chaperones had already taken us to the Arena the day before. We expected the high press box. We memorized the position of the lights. We knew we had to move quickly to set up our props, perform our five-minute show, and leave the floor.

I would love to say that our prelim performance was flawless. Truthfully, the eight of us performed much better shows at rehearsals. After exiting the floor at prelims, we were pretty bummed. After learning that we had placed sixth, going to the “Y” to practice was the only thought in our minds.

After a good night’s rest and a few hours of practice, the colorguard went to the preparatory tent to warm up for the final performance. We were all positive that our best show awaited us.

Stepping onto the arena gym floor was the scariest and most exhilarating feeling. The crowds covered the front seats and even extended into the side seats encircling the performance floor. The crowd was shouting and yelling, to wish us luck. That night, our wonderful five-minute show didn’t seem to click. Exiting the Arena the second time around was probably worse than the first. Our season had not come to an end with a spectacular “bang.” Instead, it left most of us desiring a second chance. In fact, we were all instantly reminded of our two future performances — Markofer Elementary, and Concord Pavilion.

The 1995 Winterguard season will never be forgotten. Though we didn’t arrive home with medals around our necks, we all wanted another season to grow as performers and “redeem” ourselves. The summer that followed, the colorguard became stronger and more consistent performers. We ended our season with the honor of winning HIGH COLORGUARD at the Drum Corps International Championships. I was just so proud of the award because we all poured our hearts into our performance. Together, we can climb mountains!!