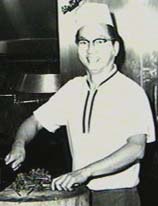 I am one of four people who founded the Ye Wah Drum Corps. It all started one winter evening when I received a phone call from Mr. Roy Wong, a good friend of mine. He told me he and a few others needed my help. Initially, I had no idea what he meant. During the conversation, it was decided that a meeting would be set up at Mr. Wong’s house; also attending would be Mr. Frank Lim and Mr. Thomas Fong. We were about to discuss and plan what would later become the Mandarins.

At this meeting, we talked about the possibility of creating a drum corps. The others asked if I would be willing to involve and commit myself to this idea. They further said that if I gave my support and said yes, that the drum corps could and would be created. I thought to myself, “What contribution could I possibly make that would be so important to this drum corps?” When I asked the others this question, the answer was simple: “Your responsibility is to teach the kids how to drum.”

Don’t get me wrong, I am not a professional drummer. During my years as a teenager, the Chinese school I attended had many activities, one of which was a drum corps. Although my experience was limited, I told the others at this meeting that I would promise to do my best in teaching kids. I was also what you might call a jack-of-all-trades. Not only did I instruct, I also designed and made the flags and uniforms that first year.

I recall the many, many parades in and around Sacramento that the Mandarins took part in. Once, we marched in three parades in three different towns all in one day! It was during this very busy time that we wanted to further expand our experience by competing in drum and bugle competitions. We joined the circuit and made the necessary changes to compete seriously.

After devoting ten years of hard work, dedication, and an unfailing commitment to the corps, I decided it was time for me to step down. In 1974, I officially “retired” from the Mandarins. As one of the founding members of the Ye Wah Drum Corps, I’m very proud of how the corps has evolved and what the corps has accomplished. I am extremely happy to have been a part of such a successful corps and I hope the Mandarins continue for another 35 years.