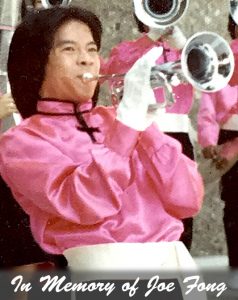 The Mandarins’ Outstanding Corps Member Award (also known as the Joe Fong Perpetual Award) is given annually in memory of Joe Fong, our 1976 recipient who played soprano in the brass section.

Each year, corps members select one of their peers to receive this award. Recipients exemplify the very best in leadership, citizenship, esprit de corps, and similar qualities learned during their journey with the Mandarins. The award is presented during the Corps Banquet at the end of summer tour.

The Mandarins’1976 repertoire included selections from The Wiz. These lyrics are inscribed on the original Joe Fong trophy: “If you believe within your heart, you’ll know that no one can change the path that you must go.”

The Sacramento Mandarins Hall of Fame was established in 2018 to help preserve the memory of the special people who have brought honor to the Mandarins and who can serve as role models for present and future generations.

Nominations are accepted each Fall and reviewed by a committee comprised of Ye Wah and Mandarins alumni members.

John Chow began his 25+ years of volunteer service in 1986. All three of his sons marched in the Mandarins. John worked at Bingo, drove and maintained equipment trucks, served as the corps’ Auditor and Business Manager, and was Head Chef during many summer tours where he cooked his legendary meatloaf and stir-fry. In 2015, John was recognized as a DCI Volunteer of the Year. As Jim Tabuchi stated at the time, “John has given in every way possible and has asked for nothing in return. There has never been a volunteer as dedicated and versatile.”

Kevin Goings, a legendary figure of music and marching education in our region, was a percussion instructor for the Mandarins from 1989-2005 and helped launch the Mandarins Entertainment unit, including the Sacramento Kings Drumline, in 2013. Always student-centered, Kevin prioritized the needs of corps members regardless of their level of experience and endeared himself to everyone with his trademark smile, sense of humor and humanity. Countless alumni speak of Kevin as the mentor and friend who made a huge difference in their lives, with many recalling their favorite “Kevinisms,” such as “It’s champs week, not chumps week!” or “I didn’t eat breakfast today because I’m hungry for some clean beats!” Kevin taught everyone to be grateful for the good stuff, and Kevin, we ARE grateful for you.

Nanci Jan became part of the Mandarins in 1984 when her children joined the corps. She served as the color guard director for both the drum corps and winter guard programs for six years. Long after her children aged-out, Nanci continued volunteering with the Mandarins. For more than 30 years she has volunteered with our Bingo, food service at every Capitol Classic show, the Mushu kitchen crew, the recent Great Plates Delivered senior nutrition program and the annual Mandarins Alumni Association dinner for the corps members. She has continued to do all of this with the patience, kindness and compassion that made her an incredible elementary school teacher as well.

Ron Munekawa wore a variety of hats with the Mandarins for 26 years, both organizationally and educationally. From 1990 through 1996, Ron instructed the Mandarins winter guard. From 1997 through 2016, Ron fulfilled several different roles for the drum corps, including member of the visual staff, visual caption head, staff coordinator, and tour manager. His organizational skills combined with his passion for the marching arts and all the young people involved made him an invaluable force for the Mandarins and every other organization in which he participated. He has the unique quality of getting the absolute best performance out of everyone around him, and his energy is infectious. The Mandarins are a better organization because of Ron.

Kathleen Bakergumprecht-Davies serves as the Vice Chairperson of the Mandarins Board of Directors, and provides legal counsel for the organization. As Fundraising Chairperson, she returned to school and received a degree in grant writing, and has been very successful in applying for and receiving grants to support the corps’ operations. Kathleen also manages the Big Day of Giving campaign. Additionally, she helped implement the Mandarins’ online store (Mandarins Marketplace), and revamped the Mandarins’ souvenir operations by helping to acquire a new trailer in 2019 and arranging for booths, displays, point-of-sale functionality, and unique merchandise – all of which helped increase sales and visibility.

Gregory Mar marched with the Mandarins from 1982-1988, in the percussion and the color guard sections. Greg was Drum Major from 1985-1988, where he led the corps to its first DCI World Championships in 1987 and 1988. Greg received the Mandarins Outstanding Member award in 1987. Subsequently, he became a percussion instructor and then color guard designer and instructor for both the drum corps and winter guard programs from 1990-2007, and Program Coordinator from 2009-2011. His memorable winter guard show designs include the “Joy Luck Club” and also the “Taiko Show” which combined live taiko drummers and color guard members into a stunning performance at WGI in both the guard and percussion competitive arenas. Greg’s creative influence helped produce championship performances in 1992 and the “four-peat” (four back-to-back championships) in 1996 through 1999. He designed the widely-recognized “M” corps logo, which represents resilience, heritage, and family.

Jim Tabuchi marched in the Mandarins Brass section from 1979-1981. He became brass instructor in 2005, Corps Director in 2010, and President and CEO in 2014. Jim increased the organization’s visibility, stature, and relationships with the local and drum corps communities by helping to establish programs including the Mandarins Academy at Sac State, Mandarins Music Academy, Mandarins Entertainment, Mandarins Pathways Program, and the DCI Capital Classic Drum Corps Show. With Jim’s leadership and commitment, the Mandarins acquired an equipment and uniform semitrailer, a mobile kitchen, and the Mandarins Music Center building. In 2017, Jim was recognized as DCI Director of the Year and also elected to the DCI Board of Directors. He became DCI Board Vice-Chair in 2019, and Secretary in 2020.

Raymond Mar served as Mandarins Corps Director for 31 years, beginning in 1983. Under his leadership, the Mandarins achieved national recognition, including eight DCI Championship titles and two Spirit of Disney awards.  Ray also served as Vice-Chairman of the DCI Division II/III Advisory Committee, where he advised new corps on setting realistic goals and building their organizations. Ray was inducted into the Drum Corps International Hall of Fame in 2013. Currently, Ray serves as an Advisor to the Mandarins Board of Directors.

Janet Wong began volunteering with the Mandarins as Booster Club Manager in 1983. In 1988, she volunteered for the Bingo Manager position, which she held long after her son aged out of the corps and up until her untimely passing in 2014. Janet’s dedication to Bingo fundraising enabled the Mandarins to provide a championship drum corps program.

Scott Jow has been involved with the Mandarins continuously since 1969 when he joined the percussion section. After aging out, he became a drum instructor from 1975-1977. He joined the Administrative Staff in 1978 and served as Historian, Corps Director, Special Services Manager, and Public Relations Manager. Scott was the Mandarins’ photographer and videographer for 30 years and created video yearbooks, video newsletters, slideshows, and the Mandarins’ first website.

Daniel Fong (Dr. Dan) marched in the Mandarins brass section from 1973-1982. He became the Brass Arranger/Designer in 1983-2011, and Brass Caption Head from 1983-1993, 2004-2009, and 2012-2016.  Under his leadership, the Mandarins achieved a record eight Drum Corps International Division II and III championships. He implemented the Mandarins Brass Academy in 2008, arranging the music and instructing through 2018. Dr. Dan joined the Mandarins Board of Directors in 2017 and also served as the Health & Wellness Co-Director. He was appointed President and CEO in 2021.

Les Wong marched in the Mandarins percussion section from 1978-1983. He was Percussion Instructor in 1983-2004, Caption Head/Arranger in 1987-2004, and Co-Arranger in 2004-2007. He helped negotiate and partnered with the Mandarins’ first equipment and product endorsements and sponsorships.

Roy, Yuk, Thomas, and Frank are founders of the Ye Wah Drums & Lyras corps. We honor them as the inaugural inductees into the Mandarins Hall of Fame. All served as staff members and/or instructors. Roy was the Corps Director and taught the bugle section when bugles were added to the corps. Roy was also the Mandarins’ General Manager for several years. Yuk taught the drum section and was the Quartermaster (Equipment Manager) and Corps Chef. Thomas and Frank were responsible for business operations and fund raising. In 2013, Frank was the sole surviving founding member and attended the Mandarins’ 50th Anniversary Celebration.