A Corps Is Born

In February 1963, founders Roy Wong, Frank Lim, Thomas Fong, and Yuk Fong discussed the possibility of forming a drum and bugle corps for youth in the Sacramento Chinese community.  With the numerous festivities and parades occurring in Sacramento and neighboring locales,  the Chinese Community, with all of its traditions and ideals, would be represented with a youth drum and bugle corps to exemplify community interest, civic consciousness, and cultural pride.

One month later, a letter was sent to Sacramento’s Chinese community, requesting support to establish a boys and girls drum and bugle corps. The initial meeting was held on March 23, 1963, at the Sacramento Confucius Temple in Chinatown. On that rainy, dreary day, eleven youngsters attended, along with a few parents and others interested in the project. The goals seemed hopeless, but this group went to work regardless, using reconditioned equipment donated by the Capitol Lions Club. The Chinese Benevolent Association provided some instruments and allowed the temple to be used for rehearsals.  The $5.85 makeshift uniforms featured  short-sleeved dress shirts, white continental trousers, black shoes, black Chinese hats, and a magenta sash. By July 1963, the new 47-member Ye Wah Drums & Lyras Corps made their public debut at the Oak Park 4th of July Parade.

The Ye Wah established their motto, based on an acronym from the corps’ name:

The corps’ staff was comprised of parent volunteers who handled everything from fundraising, to sewing, cooking, transportation, and music instruction. No music or marching experience was required of the corps members. 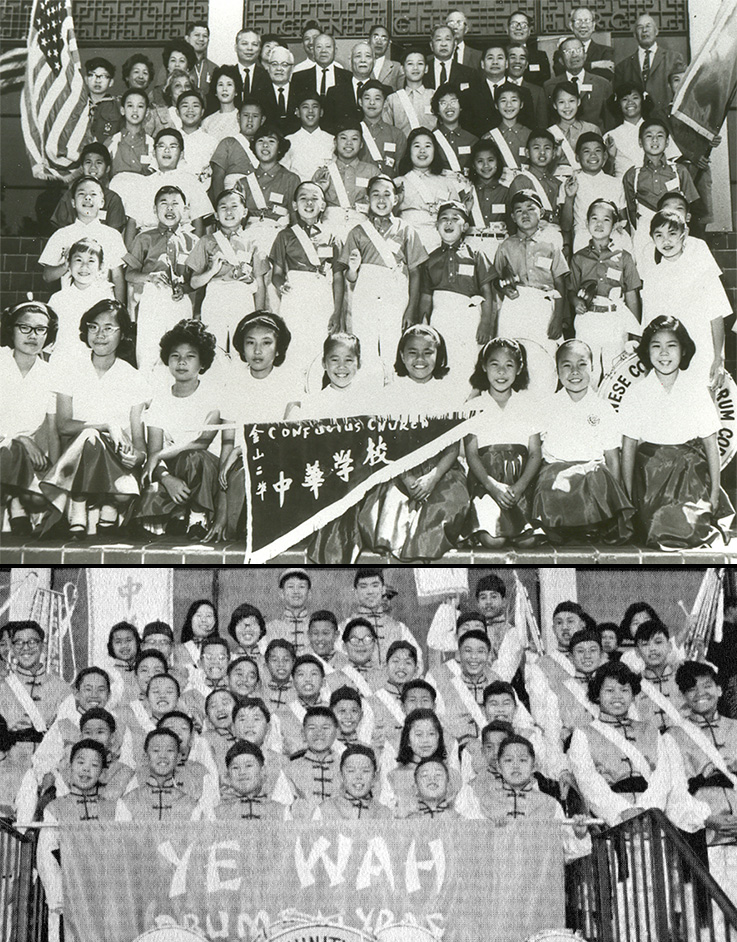 By August 1964, the Corps had performed in over seventeen parades and official receptions. A Color Guard was added that year, bringing Corps membership to about 75 members. Staff and parents held a successful fundraiser for a new Ye Wah Drum and Bugle Corps, to keep pace with present trends, provide an activity for youth aged 16-20,  and encourage competition with other drum and bugle corps. By December, the Ye Wah was on its way to becoming the “new Corps on the block.”

Gradually, the Corps improved in quality, and was highly regarded for fine performances. The Color Guard joined the California Color Guard Circuit in 1965 and became a worthy competitor, winning several awards including a Circuit Championship title. The organization’s name was changed to the Mandarins Drum and Bugle Corps in 1967. The corps was well-recognized in local performances, and soon, the Northern California competitive drum and bugle corps activity as well. The Mandarins continued to progress, competing in Southern California in 1970, and the Pacific Northwest in 1975, 1976, and 1981. The Mandarins began competing nationally in 1985. 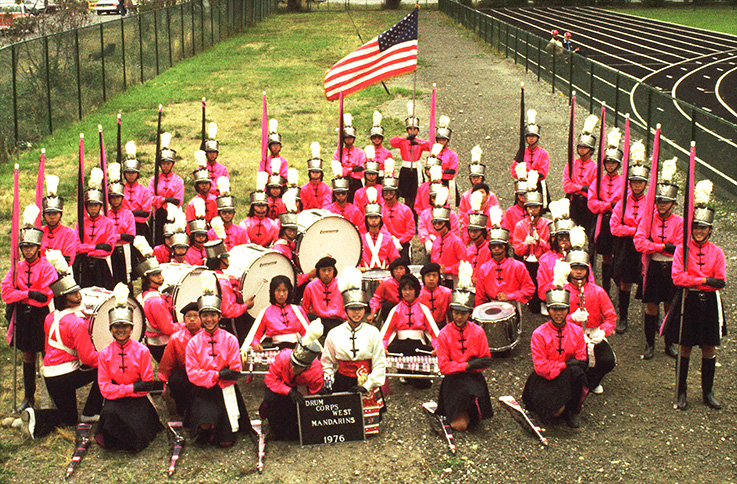 Competitors and audiences admire the Mandarins as an example of a successful, disciplined organization. The Mandarins have received extensive media exposure, both locally and nationally. Sacramento City and County government have presented resolutions honoring the Mandarins, and the corps received the Best Of Sacramento award from Sacramento Magazine.

• Spirit Of Disney Award for outstanding achievement and excellence in educational and entertainment programs for youth – 1987, 2001 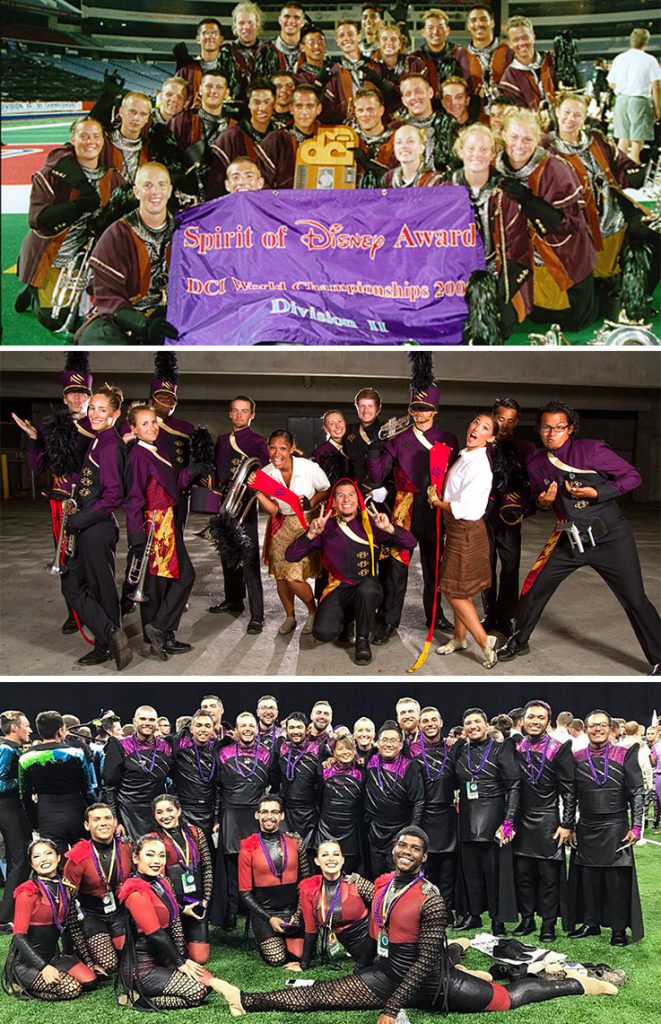 The Mandarins are proud and fortunate to have an all-volunteer Administrative Staff and Board of Directors since inception. These volunteers, along with many parents and supporters have contributed countless hours of service to fundraising, uniform management, food preparation, and other tasks to ensure the continued success of the organization and its many programs.

1963 – Roy Wong, Yuk Fong: Two founding members of the Ye Wah Drums & Lyras Corps and the Mandarins Drum and Bugle Corps. In addition to director’s duties, they were brass and percussion instructors, respectively. Also, Yuk was quartermaster and the corps chef.

1972 – Helen Owyang, Tom Chinn: Led the first overseas journey to the Republic of China where the Mandarins performed in Taiwan’s Presidential Inauguration ceremonies.

1975: Jeff Lee: Coordinated the first out-of-state tour to drum corps competitions and performances in the Pacific Northwest and Canada.

1983 – Ray Mar, Phyllis Mah, Nanci Jan: Began the Mandarins’ transformation into a nationally-recognized drum corps. The corps competed in national summer tours for the first time ever. Ray earned the corps a reputation for consistent quality and excellence as evidenced by the eight Drum Corps International Championship titles won under his leadership. He was inducted into the DCI Hall Of Fame in 2013. Ray was the Mandarins’ longest-serving Director at 31 years and is now Director Emeritus and Advisor for the corps.

2015 – JW Koester: With over 30 years as a drum corps designer, instructor, and consultant, JW’s extensive experience helps corps members perform at their highest level possible. The Mandarins are now fielding a full 154-member drum and bugle corps. Under JW’s leadership, the Mandarins earned its highest placement and score at the DCI World Championship Semifinals in 2017, and in 2018 placed 10th at the DCI World Championship Finals for the first time in the Mandarins’ 55-year history. The corps repeated its 10th-place Finalist finish in 2019. and 2022.

During its earliest years, funds were raised through individual and business donations, candy and bake sales, car washes, Monte Carlo nights, and food festivals. The Chinese Community Center (in Sacramento’s Chinatown) provided rent-free space for rehearsals and equipment. For funding, the Mandarins began Bingo games in 1984, participates in the annual Big Day of Giving, and seeks foundation grants.

To ensure future financial stability, the Mandarins purchased a building in 2019 and transformed it into the Mandarins Music Center to host bingo, special events, private music lessons, and other ventures.

The Mandarins are the only American DCI competitive junior drum and bugle corps with an Asian heritage and are in the Top 10 of all drum and bugle corps worldwide. 2021 marks their 58th year of providing a wholesome, worthwhile activity for young men and women. What makes the Mandarins endure, after so many years? Perhaps it is its philosophy — that the activity must be fun, as well as rewarding, and that the focus is not merely on winning, but on each member doing their absolute best. Perhaps it is the ideal balance of personal time, education, and drum corps activity. Perhaps it is the blending of Asian traditions with drum corps. Whatever the reasons, the Mandarins have taught thousands of young men and women the values of leadership, discipline, and good citizenship — values which are carried through school, careers, and back to the community — with a true sense of purpose.