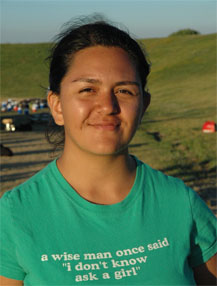 Find a true passion, because it can change your life and the life of others.

Through my participation in color guard, I have had the privilege to meet many people who were passionate about the activity. Some may have a hard time understanding why people are so passionate about marching. I tell them my story.

I have always loved the activity. It gave me the opportunity to set aside insecurities and gave me a place where personal problems did not exist. The idea was simple: leave all your problems off the field; right now your responsibility is to learn the work and get it right! Joseph Garcia (former high school guard instructor & director of Axxis Winter Guard) kept me working hard. As a freshman, he would pick on me ALL THE TIME, even as I improved and started learning faster than the older members. But there was a reason why: he believed in me. He knew he could push me more than anyone else and told me that some day I would march a Division I drum corps. He taught me a kind of work ethic and sense of responsibility (when I helped the new members) that I needed to learn at a critical point in my life. As I improved, he became my motivator and even a friend. When he left us for personal reasons, it was hard. But if I learned one thing from him, it was to move on and never give up! Two years passed when I found out that my last chance to see Joe would be at his funeral. I was surrounded by his friends and family when I realized that I wasn’t the only person who was touched by his passion and dedication. I stood up at the podium and told everyone how important he was in my life and how much I would miss him. People smiled as they seemed to agree that he had contributed to their lives as well. I almost took time off from guard, but thanks to Chad Kohlmier, my second high school instructor, I continued to march drum corps and teach at my former high school.

When it came time to keep my promise to Joe and march at a Division I drum corps, I looked around in search of a corps that exemplified the spirit of the activity and would help me grow as an individual. I decided to attend a Mandarins Drum & Bugle Corps camp to check it out. I was leaving my high school guard, friends, and family for the first time. But as soon as I stepped into practice, I could feel the intensity, the dedication to excellence, and sense of tradition which I had heard was characteristic of the Mandarins. My worries and doubts about leaving home disappeared as I realized that there was no place that I wanted to be at more than the Mandarins Drum & Bugle Corps.

I marched with the Mandarins for only two years, and dedicated my last season (2005) to Joe. After the semi-finals performance, I cried, hugged Greg Mar, and thanked him for also believing in me. I will forever be thankful to Greg and the rest of the Mandarins staff for welcoming me the way they did. I aged-out knowing that I had found a passion which added to my collection of life skills. I will always cherish my Mandarins experience, and hope that some day I will motivate others to find something they love — even if it isn’t drum corps — because passion, and the sense of accomplishment that comes with it, is contagious and can change the life of others.